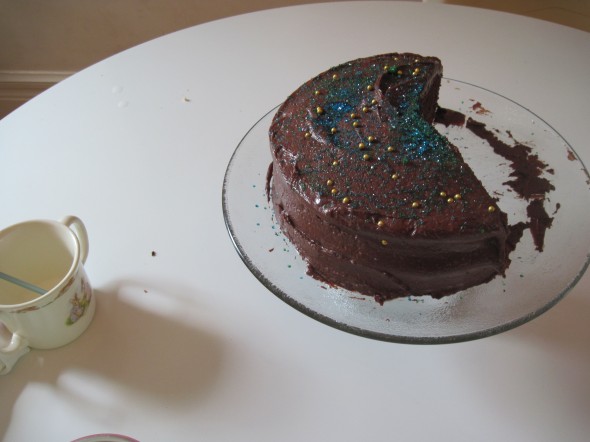 I woke up this morning feeling a bit leaden.

I’ve been spoiled this past week, with generous amounts of delicious food and wine; feverless children; numerous family adventures; and time.

It often seems that there could not possibly be enough hours in the day to finish (let alone start) any one of the things on my various to-do lists. It can be difficult to live in the moment when one’s mind is constantly leaping forward to what the next moment, and the one after that, might hold.

This is, I think, a mother’s dilemma, and not an uncommon one at that.

But last week, my husband had some time off, and we slowed things right down. We did our best to accommodate the inevitable wildness that “springing forward” wrought on our kids’ sleep schedule. We put away our lists, and made no plans.

For seven whole days, and for the first time in what seemed like ages, it really felt like time was on our side, and it was nothing short of wonderful.

So I felt leaden this morning partly because our magical week had come to an end, and all of the pressing things that I had been ignoring were suddenly looming; partly because the view outside my window was an unpromising dull grey.

But I also woke up thinking about Japan, with the kind of helpless, hand-wringing horror that is the sole province of the distant bystander.

We have one dear friend there, and she says she is doing fine, all things considered; and the venerable Ruth Reichl has had this and this to share over the past several days, which helped.

In my own life, lately, I have come to think of  time as being the greatest and most elusive of luxuries, and I am grateful to have been able to revel in it last week.

But of course, as far as luxuries go, for my safe, beautiful, healthy family and me, that’s just the tip of the iceberg.

I bet you think that I have been cooking my way through Nigella’s latest book, and you are right. I have been, and I had been loving every minute of it, until it came time to ice this luscious cake. The ganache-y topping that Nigella suggests took nearly four hours (and counting) to set, at the one moment all week when time was most definitely not on my side. So I’m offering up the icing that I made at the last possible minute as a replacement. The cake was perfect, and I bet the ganache-y icing would have been divine too, but I wouldn’t know.

Combine cocoa powder and brown sugar in a medium, heatproof bowl. Pour boiling water over cocoa mixture and whisk to combine. Set aside.

In the bowl of a stand mixer fitted with a paddle attachment, cream together butter and granulated sugar until fluffy. In a separate small bowl, sift together flour, baking powder and baking soda.

Divide batter evenly between the two prepared tins and bake 20-25 minutes, rotating once halfway through cooking time, until a tester inserted into the centre of a cake comes out clean.

Let cakes sit in their pans on a rack 5-10 minutes before turning out onto rack to cool completely.

While cakes are cooling, make icing:

In the top of a double boiler set over barely simmering water, gently heat chocolate until just melted, stirring frequently.

Place icing sugar in the bowl of a food processor and pulse to remove and lumps. Add butter and process until smooth. Scrape in cooled chocolate mixture; icing should be thick and spreadable, but if it is too pasty, add milk a few drops at a time until desired consistency is reached.

Place one cooled cake, top down, on serving plate. top with a generous dollop of icing, then place second cake on top, right side up.

Used remaining icing to frost the top and the sides of the cake.

Decorate, as my daughter did here, with coloured sugar, and serve with large glasses of milk.