I have been trying valiantly, lately, to diversify my childrens’ evening meals.

(I’d been meaning to deal with the lack of inspiring cuisine in their diets for ages, but I hadn’t realized that it had reached a crisis point until my daughter had lunch at a friend’s house this week. Afterward, the friend’s mother confided to me that my daughter was the fussiest eater she had ever seen.

Friends, you can imagine the humiliation.)

It’s not that my children don’t eat healthily, but there is admittedly a certain lack of variety in their choices.

And of course, I am complicit: I am not often inspired to shake things up when I know that my attempts are likely to be met with the worst kind of childish scorn.

Still, when a rainy night like this one pulls me to the stove, the joy of cooking can easily make me forget that anyone could possibly not like a dish of early autumnal vegetables, melted slowly over low heat with plenty of butter and garlic and handfuls of herbs from the garden.

A leap of faith is required from all parties, and a side of cheese toast for the kids is a distinct possibility here, but this ratatouille-ish dish will be the main event.

And if I have to eat most of it myself (which is likely), I won’t mind a bit. 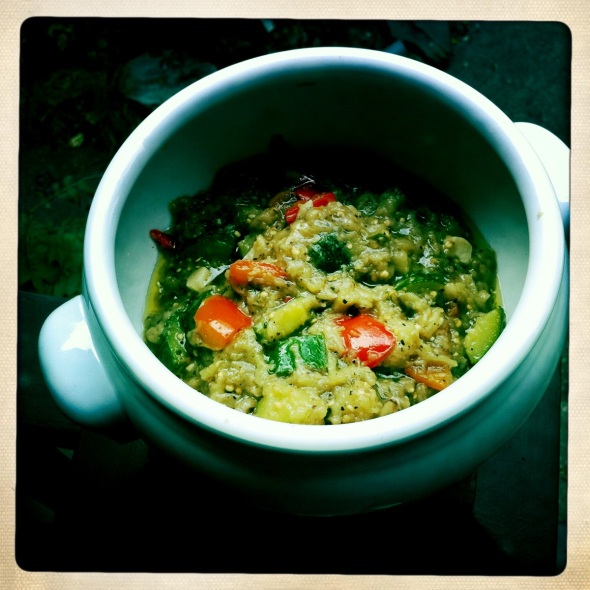 In a large, deep frying pan with a lid, melt butter over medium heat. Add eggplant, zucchini, and red pepper, and cook, stirring, about 10 minutes, or until fragrant but not yet beginning to colour. Add garlic, salt, oregano, and rosemary and stir well. Cover and reduce heat to low.

Cook, covered, 15 minutes, until vegetables are very tender and looking a little soupy. Remove cover from pan, increase heat to medium, and cook a further 5 minutes, until excess liquid evaporates.

Stir in fresh basil and serve.

Serves 2 adults, or about 47 picky children.

*I have to tell you that I cannot wait to try this dish with the best steak ever.

At least that’s what the sign outside the bakery said, and who were we, overtired and glassy-eyed with hunger, sitting stuck in traffic in our car in the rain, to argue? We had said goodbye to my mom just that morning and two of the four of us were suffering from miserable end-of-summer colds.

So we pulled over and dashed right in to check it out.

My knowledge of the Toronto focaccia scene is perhaps not the most extensive, but I can say that the good people who baked this bread have done everything right.

There is a reason their establishment is named OMG Baked Goodness; in fact it was all I could do not to devour most of our loaf during the ten-minute drive home.

Instead, I turned it into this vast, indulgently-proportioned sandwich, which is exactly what we (and by “we,” I mean, mostly, me) needed on a dreary, emotional grey day. 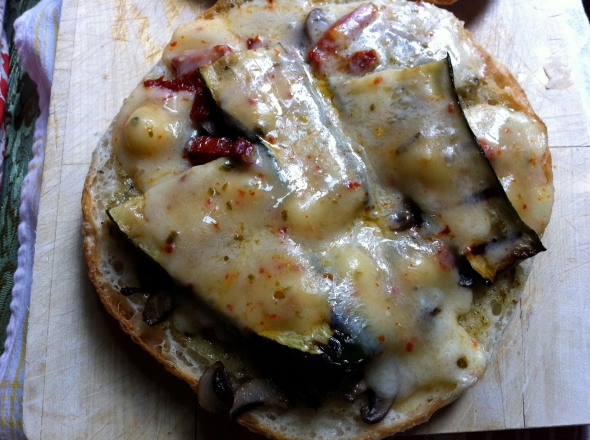 Since we are coming up to a long weekend, I’d like to suggest that this sandwich, or a similar incarnation of it – without the cheese perhaps? – would be just the thing for lunch or a light dinner en plein aire.

*I happened to have some leftover grilled zucchini in the fridge, and if I hadn’t had that I’d have used something else – likely prosciutto.

Cut focaccia in half horizontally, to make two rounds.

Divide pesto mayonnaise evenly between focaccia halves, and then layer each half with equal amounts of each topping. Place on a large baking sheet and cook under the broiler until cheese has melted. Let stand 5 minutes before serving.

Cut into wedges, this would easily feed six, or even eight with a side salad. 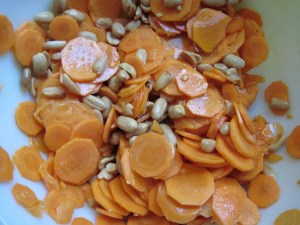 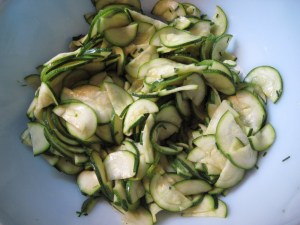 I love the idea of making pickles.

For me, pickling conjures up visions of charming country kitchens, steaming pots, banging screen doors, and faded Liberty print housedresses; row upon row of shiny jars packed with bright, tasty things to spice up the dreary winter ahead.

At this time of year especially, that vision of industry, tradition and simplicity has its appeal.

Of course, it’s totally a fantasy: despite my attempts at various other incarnations over the years, I am a city girl through and through, completely and happily entrenched in city life, not bound to tradition, and not terribly industrious either – especially when the task at hand involves the kind of repetition that home canning demands.

I am also not a fan of making things in bulk, so, much like life in that country kitchen, those rows upon rows of jars would drive me a little crazy after a very short time.

(And did I mention that I don’t even really love pickles?)

And yet – and yet! – the fantasy remains.

These two (delicious, bright, and easy) salads are the closest I will come this year, but they will, in my mind’s eye, almost get me there.

I should warn you that neither of these salads keeps particularly well over night, so don’t plan for leftovers.

Whisk together vinegar and oils in the bottom of a large non-reactive bowl (I use a Pyrex mixing bowl).

Add carrots and toss well. Leave 3-4 hours, if you can!

Place zucchini in a large non-reactive bowl (I use a Pyrex mixing bowl). Add 1/4c of the vinegar, 2 tbsp of the sugar, and 1 tsp of the salt, and toss well. Let sit at least an hour or two, then turn zucchini out into a colander and drain well.

Each salad serves 4-6, depending on what else is on offer. Faded housedress optional.

Friends, it is going to be Labour Day!

I have to say it: How did this happen?

Actually, I have a pretty good idea of how it happened, but it still seems incredible that even my time to make up for lost time this summer is coming to a close.

In response, my husband and I have spent the past few days tearing around our city and its surrounding areas in full staycation mode, dragging our children from one picturesque location to the next, camera at the ready, trying to eke out as much carefree living as we can before getting down to the serious work that will come with September.

In spite of the summer’s having fled by at an astonishing pace, with me and my apron flapping haplessly along behind it, I am determined to make the most of what is left of its bounty.

And what a bounty it is! This has been the most dreamy of seasons for produce in our area, and we have been gobbling up blueberries, peaches, corn and tomatoes by the handful.

So it isn’t that we haven’t been eating the good stuff.

It’s just that I haven’t really been cooking it much – unless you consider grilling to be the same thing as cooking, which I do not.

I do support the popular notion that really good, fresh food needs little adornment to make it tasty and lovely, but I have to admit that I am ready to get seriously back into the kitchen.

So much so that yesterday, after a day at the beach and despite the high temperature outside, I made this lovely curry. We ate it out on our deck, the smells from our neighbours’ barbecues wafting around us.

And, for possibly the first time this summer, I didn’t feel like I was missing a thing.

The best part of this dish is the curry paste. You pound it together yourself, using a mortar and pestle, which is equal parts aggravating and gratifying – but so worth it!

To make curry paste, first bash together garlic, ginger and sea salt in a mortar and pestle until a coarse paste forms. Add cumin, coriander, mustard seeds, and curry powder, and keep pounding until mixture is fairly smooth and cohesive. Set curry paste aside.

Turn heat down to medium-low and add curry paste to pot. Cook, stirring, until very fragrant, about a minute. Add zucchini to pot and stir well. Add coconut milk.

Bring just to a boil, then stir well, cover and simmer until zucchini is just tender, about 10 minutes. Stir in cashews and fresh coriander. 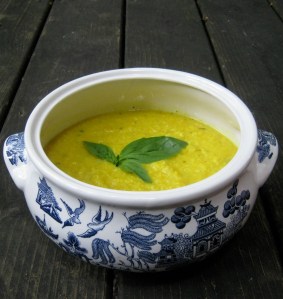 Our house is in chaos at the moment.

Having just said goodbye to the last guest we will have at this address, we have begun to dismantle our life here. It’s not the most fun process, partly because of the emotional weight attached to what we are doing – but also partly due to the fact that it is an extremely messy undertaking.

Simply put, there is crap everywhere.

How is it that we’ve managed to accumulate so much in the three short years we have lived here?

When did I, formerly known to my friends as the compulsive minimalist, become the kind of person who has boxes and bags and bins of excess to cart to the Goodwill every day?

For every box I pack, there is another filled with things we no longer need – if indeed we ever needed them in the first place.

Going through our things, I’m half fascinated and half horrified by the pile-up; but when I manage to shift my eyes from the miasma I feel terribly lucky.

Lucky that we’re in the privileged position of having more crap than we know what to do with.

And lucky that we are moving on.

The great thing about this easy-going soup is that it works hot, warm, or even tepid. I have never tried it fridge-cold, but at room temperature it’s great.

Add garlic and tumeric and stir; then add lemon juice and zest, broth, and rice.

Cook, uncovered, about 20 minutes, until rice is cooked and zucchini is tender. Add basil leaves and remove from heat. Puree soup in batches.

Serve warm, but not necessarily hot; garnish each bowl with a handful of mozzarella.