Just wait until you try this sauce.

A couple of months ago, things around here had begun to go so wildly awry that my husband was moved to ask me incredulously, as I struggled to pull a one-inch splinter out of the bottom of my foot using a sewing needle and a pair of tweezers, “how could you possibly have so much bad karma?”

It’s a question to which there is no real suitable answer.

Still, because I take deep solace in food during times of adversity, that period was one in which many great meals were consumed in my house.

And a fair number of them involved this sauce.

It started out its life as a component of what I would loosely define as an Andean-ish potato dish, but I had far more sauce than potatoes on that particular late-spring evening, so it morphed into the kind of catch-all condiment that could improve the (forgive me) karma of just about anything that was thrown its way.

Almost an entire season later, it is still in heavy rotation. 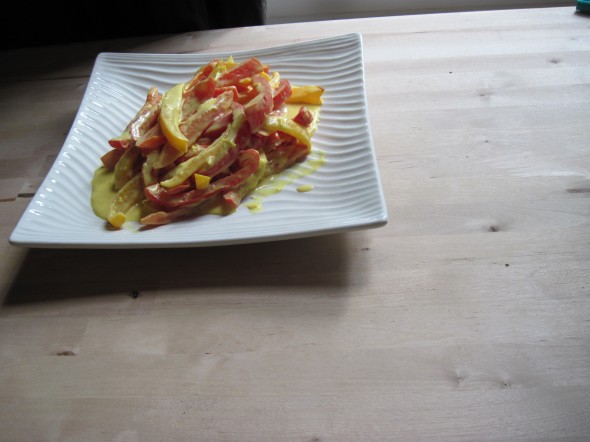 In the photo you see above, I tossed it with some sauteed peppers, but that was just because they were what happened to be laying about. I would highly recommend it with the little local potatoes that my husband keeps bringing home by the basketful, and I can’t even tell you how blissfully it pairs with corn on the cob.

(I have mentioned before, probably at just about this time of year, that I do not find summertime cooking to be especially inspiring: the grill and I don’t have a relationship to speak of, and I am largely fine with that. There are a lot of fun things that happen outdoors at this time of year, but for me, cooking is not one of them. I like my kitchen.

Still, I bet you could slather this sauce on whatever thing you just pulled off the barbeque, and it would redeem even that.)

What can I tell you? It’s just that good.

1 egg yolk*
1c whole milk
500g feta cheese, crumbled
1/2c olive oil (not extra virgin)
2 fresh hot yellow or green chilies, de-seeded and de-veined and finely chopped (leave in a few seeds for a spicier sauce)
2 cloves garlic, peeled and finely chopped
1/2 tsp ground turmeric
1 tsp flour
* I would consider the egg yolk optional if you are feeding a pregnant woman, young children or anyone whose health may be compromised. If you opt not to use the yolk, increase the flour slightly.

Combine egg yolk, milk, and feta in a blender and blend until smooth. Leave in blender.

Place olive oil in a heavy saute pan set over medium heat. When oil is hot, add chilies, garlic, and turmeric to the pan, and saute, stirring frequently, until softened and slightly golden, about 2 minutes. Add flour to pan and stir well. Reduce heat to low and add feta mixture from blender to the pan. Cook, stirring, until sauce is thick. Using a rubber spatula, pour and scrape sauce back into the blender and blend until smooth.

Add a little milk, if necessary; sauce should be the consistency of heavy cream.

Makes about 2 cups, enough to dress about a pound of cooked baby potatoes and still have plenty left over. Refrigerate leftovers promptly.

I don’t want to jinx anything, but this feels like the week things are beginning to take a turn for the better around here.

The weather, for one, is looking much more promising; the sun bursting through the clouds this afternoon had jangly summertime song lyrics bouncing through my head.

Sticking to my Lenten resolution has not been as painful as I might have thought (possibly because I have been compensating for the lack of baked goods with sushi and potato chips in equal measure), and I have found that going largely, although unscientifically, gluten-free has made me feel more clear-headed and slightly less fatigued.

My children and I are all germ-free for the moment, and my husband and I have been spending what feels like a gluttonous amount of time together.

As the kids say, it’s all good.

My week so far has also included a couple of bits and pieces of good news, which I will have to keep under my hat for the time being, but we are celebrating around here nonetheless with (what else? )cake: this flourless cake.

And this pale green soup, which will counteract the cake and put a little virtuous spring in your step. 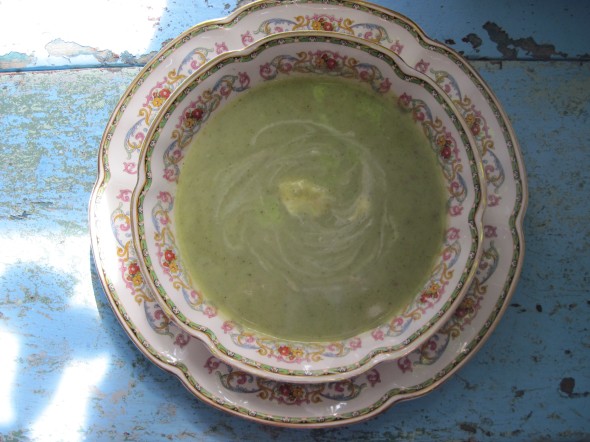 This is adapted from a great basic cookbook called Whining and Dining, by Emma Waverman (yes, that Waverman!) and Eshun Mott. I can never bring myself not to fiddle with their recipes, but my husband follows them to the letter and the results are always perfectly good.

In a large pot set over medium heat, melt butter. Add onions and cook for 5 minutes, stirring occasionally, until just beginning to colour. Add broth and potatoes and bring just to a boil; then simmer, uncovered, until potatoes are tender-crisp, about 10 minutes. Add broccoli and return to a simmer. Continue to simmer 8-10 minutes, until vegetables are very tender. Add coconut milk to pot, and use an immersion blender to blend until smooth. Season with salt and pepper as desired. 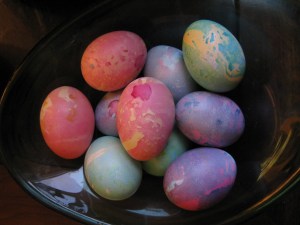 I had every good intention of making at least a portion of my Easter dinner in advance, to share with you here.

Sadly, that isn’t what happened, but I can tell you that the fabulous ham recipe I am using can be found here, and I am making these potatoes. There will also be green beans, possibly a salad, and whatever remains of this morning’s chocolate haul for dessert.

Now, a glass of bubbly and we’re off to join Alysa’s family to hunt for eggs.