I tend to greet the first month of the year less than enthusiastically.

I am wont to feel a little bitter about the end of the holidays and the return to routine (as a friend recently said on a Tuesday morning, “where are my pancakes? Where is my bacon?”) and I cringe at the thought of dark mornings and foul weather stretching out two or three more months.

But, now that we’re well into February, I have to tell you that the last day of January this year filled me with nearly as much hopeful enthusiasm as I felt for the first. And the seasonal ennui that usually causes my body to demand bread and butter and cheese, in such quantities that every meal feels like a battle of wills, has been largely absent.

I know that this is at least partly because the temperatures in our city have regularly crept nearly into the double digits (that’s above zero), accompanied occasionally, if bizarrely, by enough snow for my children to get their 45-minute fill of snow-angel-making and snowman-building. I went running outdoors last week in cropped pants, and left my coat open on an afternoon walk with my husband.

So the weather has helped.

But the first several weeks of 2012 have also flown by very quickly, a fact for which I am extremely grateful.

I can actually barely remember the first 14 days or so, which were taken up by my attempt at a January cleanse.

(I have nothing good to say about that experience, unsurprisingly, except that now that I am back to eating and drinking normally, if not with abandon, each meal seems to bring with it a fresh opportunity to consume something delicious.)

But aside from that brief donning of the proverbial hair shirt, my resolutions for the new year have taken a while to take hold, as they usually do.

And I know you know me well enough by now that, despite its title, you aren’t expecting any kind of crisp, leafy goodness from this post

(indeed, you could be forgiven if you are not welling up with enthusiasm for the dish you see photographed here. The ravenous hordes – my husband and I – had been waiting for it to come out of the oven for what felt like far too long for me to do its gloriousness any kind of photographic justice last night, and to be fair, it actually didn’t look any better the next day when I put slightly more effort into trying again.

And if all of that doesn’t make you want to spring into action, I understand completely, but I will still heartily encourage you to make this dish. It’s that good, if not that pretty).

What I can offer up is winter comfort food at its finest, a little bit lavish but not enough to irrevocably derail any food-related resolutions you may, like me,  have high-mindedly made a few weeks ago.

A kind of quasi-fresh start, if you will. 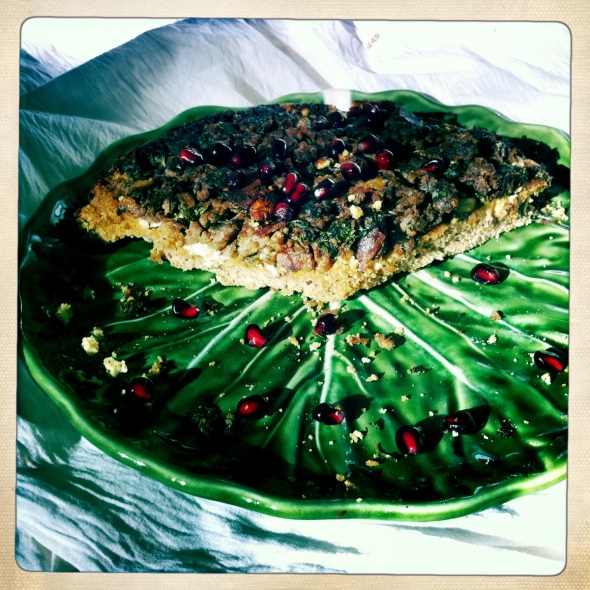 I have to stop short of calling this a pizza, but pizza is what I had in mind when making it. I was in a rush, though, so needed to rethink the crust completely, which led me to a lovely old stand-by dish of Nigella’s called Supper Onion Pie.

Now, onto the crust. I made mine in the food processor because I was feeling very pressed for time, but mixing it by hand would also be no trouble at all. Sift together the dry ingredients in a large mixing bowl. Combine remaining ingredients in a smaller bowl and whisk well to combine. Stir wet ingredients into dry, just until a firm but sticky dough forms.

Turn dough out onto a lightly floured surface and pat into a round roughly the same size as your pan. Gently transfer dough onto filling and press firmly on the edges to seal.

Remove from oven and let stand 5-10 minutes before inverting onto a serving plate.

It’s been a pretty austere winter around here, from every perspective but the foodie one.

We’ve been besieged by  just about every flu bug and head cold and general bad feeling that has come our way, and we’ve not left our nest nearly enough.

The result, a lack of sleep and fresh air and an excess of time spent contemplating these four walls, has done nothing to propel me forward into my usual post-new-year’s effort to change my life via diet and exercise.

Which isn’t necessarily a bad thing.

Instead of even considering a routine any more punishing than my current one (the sleepless, scratchy-throated haze that all of you who have had sick small children will recognize), I have been luxuriating in my cookbooks and old issues of Gourmet, baking my (sweat)pants off, and throwing myself with abandon on any dish that involves starch and cheese and the oven. 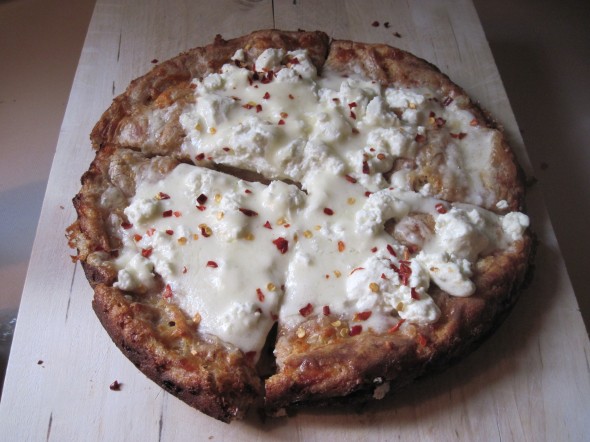 Like this one, which has become the new lunch-time staple at our house. It’s from Nigella Lawson’s new book, Kitchen: Recipes From the Heart of the Home, and it is so simple and quick and basic that you can do almost anything with it. The recipe that follows is my slightly-tweaked version.

Preheat oven to 400 degrees. Liberally grease an 8″ round cake tin or pie plate.

Whisk together flour, milk and egg until smooth. Stir in two-thirds of the grated cheddar, and turn batter out into prepared pan. Bake 30-35 minutes, until golden and bubbly. Remove from oven and sprinkle with remaining cheddar and goat cheese.

Return to oven for a further 5-10 minutes, until cheese is melted. Remove from heat and let stand 5 minutes or so before cutting into wedges.

This has never served more than the four of us, keeping in mind that two of us eat very little.