I love a leap year.

In this era where nearly everything can be adjusted to suit standards that seem more exacting by the day, where we calculate our time down to the second on a regular basis and even a baby’s birth can be scheduled, there is something to be celebrated – something pleasingly archaic if slightly bizarre – in the continuing existence of February 29th.

The only down side is that it prolongs the end of this dreary month, which, as far as I am concerned, could not come soon enough.

Just when I thought I had endured this balmy winter largely unscathed, I was beset recently by the dreaded seasonal slump – I’ve mentioned it before, and I even had the temerity to suggest that I had avoided it this year; but that was sadly not the case (as evidenced in part by the recent waffle-mania that has overtaken our house).

So we aren’t celebrating the extra day in February, exactly.

But it will be six years ago tomorrow that my husband and I moved to this city that my family now calls home, and to that I’ll happily raise a glass.

It’s been an eventful few years – which coming from me, having lived a fairly unconventional and action-packed life, is saying a great deal – and although there were some harrowing times that I could certainly have done without, most of the time I marvel at how far we have come.

This recipe takes me back to the early days of my first pregnancy, and the beginning of my time here: a time when I felt utterly unmoored, far from everyone who knew me well and overwhelmed by what I had undertaken when I decided to embrace this new life, new love, new neighbourhood – and vastly empty new home.

Of course it all came together, and relatively quickly at that.

But before it did I made a batch of socca one cold, bright March afternoon and ate it off a paper towel with my fingers, sitting on the floor all alone and looking out the bare kitchen window and shaping, in my mind’s eye, a life.

I have made one addition to to this simple recipe, and fiddled somewhat with the method, so if you are a stickler you’ll find the original here. This is a southern French dish, ideally paired with cold rose served in tumblers in the heat of an August afternoon, but for some reason it always comes calling for me at this time of year.

Sift flour into a large mixing bowl. Add salt, cumin and pepper and stir to combine, then slowly whisk in water to form a smooth batter. Whisk in extra virgin olive oil. Cover and let the batter sit for as long as possible, ideally an hour or two and overnight if it comes to that.

Set a 10-inch cast iron skillet on a rack in the middle of the oven and preheat oven to 450 degrees.

When oven and pan are hot, remove pan from heat; swirl about a tablespoon of olive oil into the pan, then add a scant ladleful of batter, tilting the pan so that the batter reaches the edges and thinly coats the bottom. Return pan to oven and cook 8-10 minutes, until batter is golden around the edges. Gently flip the socca in the pan; return to the oven and cook a further 3-4 minutes, until golden and crispy on both sides.

Slide socca onto a plate and eat (or serve) immediately.

on the first day.

I have attempted several times to write about our holidays thus far, and each time it’s been a struggle to express the balance of joy and relief and heart-filling happiness and exhaustion – and also the sense that memories are being made every second, and the need to document them while still being fully present in the moment – that is Christmas time with young children.

It’s been wonderful, and zany, and at points overwhelmingly emotional.

We have missed family, and shed tears for lost loved ones. We have ached for friends who are enveloped in grief.

We have celebrated our good health and our good life and our great good fortune, to have all that we do.

And today – blessed first of January! – we cracked into a brand new year.

I got out first thing, before it started to rain, and when I got home we drank the last of the bubbly and said a fond farewell to our Christmas tree.

And we ate an enormous breakfast, which we all enjoyed… 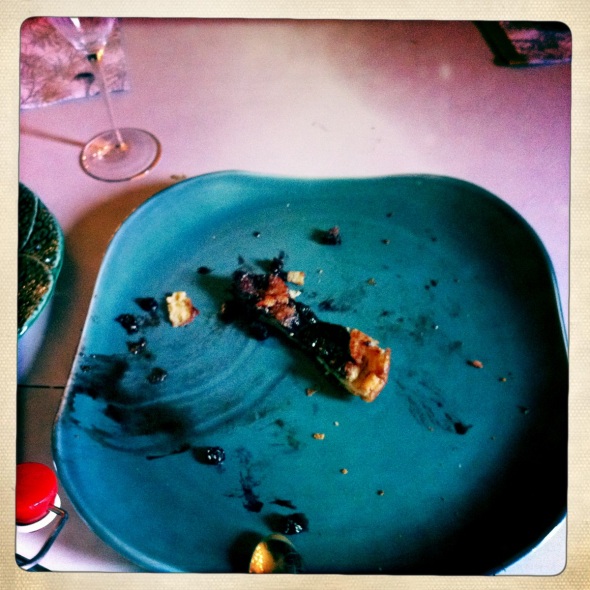 And then there was dancing.

In a large mixing bowl, whisk eggs and milk together, then add flour and 1 tbsp granulated sugar. Whisk to combine (batter will be slightly lumpy). In a small bowl, stir together remaining granulated sugar, brown sugar, and cinnamon. Set aside.

Heat 2 tbsp butter in a 10-inch cast-iron skillet over medium heat. Pour batter into pan and scatter blueberries over top.

Bake 8-10 minutes, until edges of pancake are puffed and golden but centre is still slightly runny. Remove from oven, and sprinkle with sugar and cinnamon mixture.

Dot with remaining 2 tbsp butter, and carefully turn the pancake over in the pan. Return pan to oven and cook a further 3-5 minutes, until pancake is risen and golden and sugar has turned to syrup.

Remove from oven and invert pancake onto a serving plate. Cut into wedges and serve immediately.

Friends, I hope you had a perfect long weekend. Ours was exactly right, filled to overflowing with food and wine and sunshine and overwhelming gratitude.

Here’s how it looked:

As I mentioned on Friday, we started celebrating a day early…

And my children helped me with some baking.

Bikes were ridden and coffee drunk.

There was a duck…

And even after baths were had and pyjamas put on, nobody wanted to go to bed.

The joy I take in this life knows no bounds.

I have spent the last two years grappling with a particular fear.

You could argue (and you wouldn’t be the first) that my fear is essentially unfounded, and that the odds of the thing that I dread actually coming to pass are so minimal that what I am feeling could more accurately be described as paranoia; but nevertheless, it’s there:

I am afraid of being attacked by predators in our local park.

The park is vast and beautiful, and I used to spend hours upon hours there. From the time of my first pregnancy, I have run through it, walked around it, thrown sticks for the dog, eaten ice cream, fed ducks, visited the zoo, gone sledding, and all around revelled in that park.

It’s part of the reason that we chose to live in this neighbourhood, and it’s full to bursting with memories of happy moments.

I could not have imagined a time when my children and I would not while away a large part of our days there, until two years ago, when a dear friend was attacked and killed by predators in the kind of freak encounter that makes international headlines. It didn’t happen in our park, but, to my mind, it could have.

So, to keep myself safe, I have skirted around it – the park, the grief, the horror. I just don’t go there. My running route takes me well around it, and I visit smaller playgrounds with my kids. Instead of the zoo, we take the car to a farm across town.

I don’t think it’s been so bad. But I have been feeling, lately, that something has to give.

So this morning, I met up with another dear friend of mine who has been grappling with some rather weighty concerns of her own. It was pitch dark and pouring rain, and we walked her dog all through that park, chatting all the while. It was wet and muddy and intense, and I was afraid, but mostly it was great.

I loved reconnecting with her, and getting back to a place that has meant so much to me.

It was a start.

I slipped in the door to the sound of my children laughing and the smell of cookies baking in the oven, and not long after that, the sun came out on the most glorious fall day we’ve had yet.

I can’t wait to do it again.

In a small bowl, sift together flour, baking soda, salt, cinnamon, and ginger. Set aside.

Drop heaping quarter cupfuls of dough onto prepared baking sheets, and flatten cookies slightly with a fork. Bake, one sheet at a time, about 20 minutes, or until lightly browned. Cool completely on baking sheets.

Friends, I hope you will forgive the radio silence from this side of the screen.

I had vowed to post not less – and, ideally, more – than once a week, but, oh, the frenzied pace. My husband and I own a business that runs on roughly the same calendar as the school year, so things are especially non-stop just now.

I have been getting up before the mice (I wish at least part of that sentence didn’t have to exist) so I can go for my morning run in the pitch dark and be home before my kids wake up; happily, our morning baking ritual has not suffered much in our panic to shoehorn ourselves into some kind of back-to-school routine, but there are many, many other things with which I have not kept up.

Still, as much as September always kind of knocks me flat, there is a lot of joy to be had around here. We’re all eating pretty well (even the mice), and I have a cupboard full of good wine and a fridge full of good cheese, the result of some impromptu entertaining over the weekend.

And two gorgeous steaks that didn’t get eaten last night as planned, which I intend to cook a la momofuku. A little gluttonous for a Monday night, perhaps, but it’s raining, and my husband is coming home a little earlier than usual. So why not celebrate?

There will still be plenty to do tomorrow.